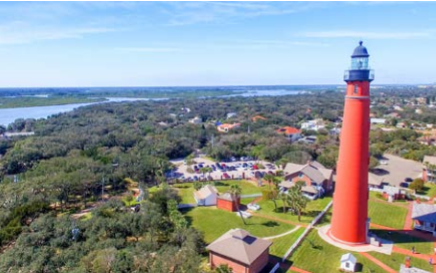 Florida has a very rich history. The state itself was the beginning of the European discovery of the land that is now called the United States. Much closer to home, the Ponce de Leon Inlet also is part of the history books, where wars and storms ravaged the land, yet gave visitors hope and opportunity. Through it’s up and downs, the area has become one of the most memorable land sites of Florida. Here’s why!

The area was home to the Timucua natives They lived in South Georgia and North Florida. It’s believed they were the first to see the Spanish explorers arrive to Florida. As war and disease struck the population, the numbers of the Timucua people decreased drastically. Any survivors are thought to have joined the Seminole tribe.

2. The inlet had a different name The area used to be called Mosquito Inlet for its abundance of mosquitos. It wasn’t until 1927, that local residents decided to change the name to Ponce de Leon Inlet.

3. The first “lighthouse” was a bonfire The Ponce de Leon Inlet has one of Florida’s oldest lighthouses. However, the first lighthouse started in 1774, where the British colonizers would lite bonfires on the sand dunes to help ships navigate through the bay.

4. An official lighthouse wasn’t built until 1835 It was about 45 feet tall. However, its builder, Winslow Lewis, was infamous for having bad building practices. His unskilled practices became apparent in 1835 when a hurricane destroyed the lighthouse.

5. The Ponce de Leon lighthouse is the tallest in Florida. The most current lighthouse stands proud, strong and tall now. It’s also the 3rd tallest in the United States.

6. The lighthouse saved lives A famous life it saved was author and journalist, Stephen Crane. In 1897, Crane was shipwrecked far off the New Smyrna coast after returning from a job covering the Cuban Revolution. Crane, along with other men, spotted the small light from the distant lighthouse and used it to navigate to shore.

7. The area was part of major American wars During the revolution, Confederates would use the inlet to ship equipment and weapons to the rest of the state, until it was taken over by the Union. The lighthouse was also used during World War II, serving as barracks for the Coast Guard. The guardsmen would stand watch for enemy submarines.

These are just a few impacting moments that the Ponce de Leon inlet experienced in its historical timeline. However, there are many more. We encourage you to visit the area, especially the lighthouse to learn more about it! Also, get to know the inlet’s local wildlife, where you can encounter local birds, dolphins, manatees and much more! Feel free to give us a call and ask us any questions. We’re here to help!