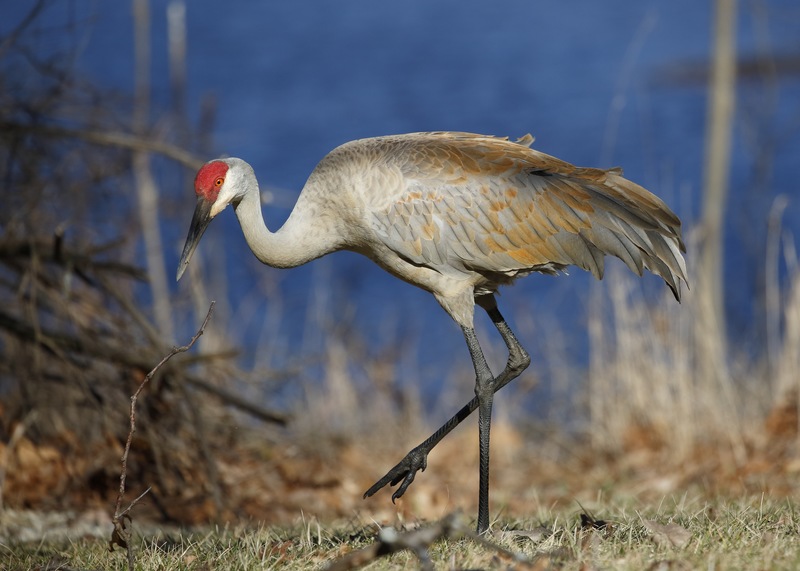 A common sight across Central Florida, the sandhill crane is an interesting and intriguing animal. Protected under Florida law and revered by many local residents, this bird is designated as “threatened” by the Florida Fish and Wildlife Commission (FWC) due to waning numbers in recent years.

However, since they are so often seen in residential neighborhoods, by highways, and sunning themselves or fishing for food in nearby swamp areas and rivers, many people take this majestic bird for granted. In this article, you’ll learn more about the sandhill crane and how you can see them in their element:

Reaching a maximum height of nearly four feet with a wingspan of nearly seven feet across, this species is an impressive sight to all who witness it in the wild. Gray in color with a long neck and thin legs, this crane has red skin and a bald spot on the top of its head. In flight, the sandhill crane fully extends its neck, which is unique among other flying birds.

The sandhill crane diet consists mostly of seeds, berries, and insects (as well as worms and grubs). Amphibians (such as snakes, lizards, and frogs) and small animals like mice and tiny birds round out their diet.

Their non-migratory nature means sandhill cranes can be viewed year-round in Florida. Nesting in freshwater ponds and marshes, these social cranes are monogamous, meaning they mate for life with only one fellow crane. They are usually seen in pairs or family groups. Eggs are typically laid in pairs, and the gestation period is 32 days. Offspring are able to fly and hunt with parents just 24 hours after birth.

One point of interest is that sandhill cranes are the oldest of all known birds currently in existence. A 10 million-year-old crane fossil discovered in Nebraska is believed to be a direct ancestor of the current species. The oldest unambiguous sandhill crane fossil is 2.5 million years old.

Currently, the biggest threat to sandhill cranes is land degradation and loss of habitat. This is primarily caused by wetland drainage or land use conversion for development or agricultural use. Since they depend on a reliable source of water to survive, in recent years these cranes have become a common sight at golf courses, residential subdivisions, and other areas where water and food are easily accessible.

Along with previously-mentioned food sources, sandhill cranes have also been known to consume other material such as mowed grass, acorns, bird seed, and even some grains/bread. Still, FWC officials urge the public to resist the urge to feed these cranes, since doing so has the potential to reduce their natural protection instincts.

It’s important to note, however, that normal digging for food on front lawns is perfectly normal. In fact, this behavior has several benefits. Some homeowners have found the animal’s natural tendency to forage aerates turf and creates a sort of biological control of pests.

As with all wildlife, the best way to truly appreciate the beauty and wonder of sandhill cranes is to see them in the wild. That’s where you can witness bird interaction and get a close-up view without fear of danger or traumatizing the animal.

When you book a scenic boat tour with The Manatee, there’s a great chance you’ll see this elegant creature at home among the Florida brush. In addition, onboard guests have marveled at dolphins, pelicans, a variety of fish, and a wealth of other wildlife.

Contact us today to embark on an exciting two-hour journey you’ll never forget.