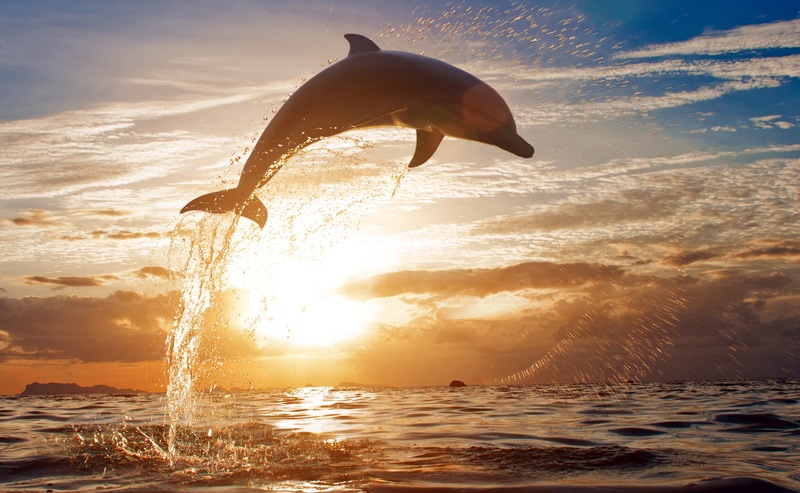 For several, Florida is considered a paradise. Many also call the state home. But it’s not just humans that thrive in this beautiful state. Hundreds of land and ocean creatures flourish in the area. Since Florida is a peninsula, residents and guests will commonly connect with the ocean life. One popular sea creature: the dolphin. There are several species of dolphin that pass by or live in Florida’s coastal waters. But which species will you most commonly see? Let’s find out!

This species is perhaps the most popular worldwide. Seen in many movies and aquariums, the bottlenose is the most common dolphin in Florida’s water, appearing as south as the Florida Keys. This blue-gray dolphin has a robust body that is about six to twelve feet long. Its name “bottlenose” originates from its short and stubby beak. Quite frequently, you’ll find them riding the waves caused by boats or jumping out the water for fun.

These dolphins have a beautiful hourglass shaped pattern of muted colors. They come in two different sub-species, long-beaked and short-beaked, and so have a slightly different appearance between the two species. The common dolphin may not be easily spotted near the shore as they hunt in deeper waters. However, offshore fishing enthusiasts and deep-sea fishermen may frequently encounter the common dolphin as the species is known to take advantage of human fishing to hunt, catching any fish that escape fishermen’s nets or any discarded fish.

This stealthy dolphin has a dark gray upper body that fades out to a medium to light gray. You’ll also find on the dolphin – you guessed it – spots. As the dolphin ages, it develops white spots near its chunky beak. The more spots, the older the dolphin. Think of it as gray hairs! The females are surprisingly larger than the males, however, the average size is around 7 feet long. Viewers will typically find them in groups from five to fifty, and chatting actively on the surface as they are very vocal.

Florida’s warm waters allow us to encounter the dolphin all year long. By booking a guided tour, experienced professionals can help you understand Florida’s sea creatures and how to interact with them in a fun and safe manner. As you tour with the Manatee Cruise team, we’ll help you see these fun and energetic creatures the best way possible, live and up close in their natural environment. Contact The Manatee Scenic Tour Boat today to book your ocean tour!